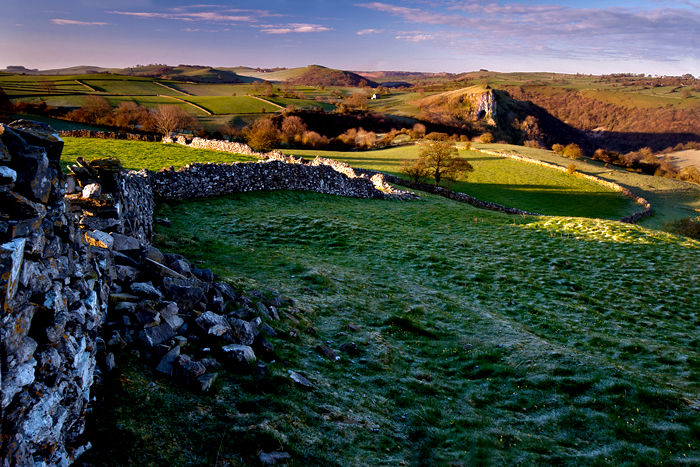 I decided, this year I would like to focus on White Peak. The south-west part of Peak District National Park. There are so many beautiful places, maybe not visible on first sight. The more I go, the more I like this place. It’s got no high peaks or great lakes but there is something there…

This time I wanted to visit Thor’s cave. Thor’s cave is a natural cavern located in the Manifold Valley of the White Peak in Staffordshire, England. Located in a steep limestone crag, the cave entrance,  symmetrical arch 7.5 metres wide and 10 metres high. It is prominently visible from the valley bottom, around 80 metres (260 feet) below.

I did not want to do a classic shot with the cave to be dominant in the frame. I wanted to capture the cave with its surroundings. It was a beautiful cold morning with frost on the ground. We found a great spot exactly opposite entrance to the cave. Altogether, I did a few shots with various compositions and this one above is one of the best from a lot.

With the risen sun we decided to walk back to the entrance, visit the cave and enjoy excellent views over the Manifold Valley.

As Wikipedia states, excavations in 1864–1865 and 1927–1935 found human and animal remains, stone tools, pottery, amber beads, and bronze items within Thor’s Cave and the adjacent Thor’s Fissure Cavern. The caves are estimated to have contained the burial sites of at least seven people. The finds suggest the cavern was occupied from the end of the Palaeolithic period, with more intensive use during the iron age and Roman periods.

…and one more interesting fact for music lovers:

The cave was used in the filming of The Verve’s 1993 video for their single “Blue”.Also, it is pictured on the front cover of the band’s first album, A Storm in Heaven.

Then we headed back to Paul’s car and we went location scouting. I setup to myself a little challenge to photograph Stone circles all around Britain and present them in a same format – B&W and panoramic. Peak District is a great place for Stone circles hunting. There are around 20 Stone Circles surviving in Derbyshire and the Peak District. A few more have been destroyed during the last couple of centuries. Stone circles were built in Derbyshire and the Peak District during the late Neolithic and early Bronze Ages, approximately between 3,000-1,500BC. Today we decided to visit two of the best: Nine Ladies Stone Circle, on Stanton Moor and Nine Stones Close Stone Circle also known as the Grey Ladies. Those places are magical. The reason for them is not altogether clear though it is thought they had a religious purpose.

Places are amazing, but because the sun was high and the light was not good enough for landscape photography. I did only a few reference shots. To help me be prepared when I’ll come next time ….

Leave us a note ! Cancel reply

This site uses Akismet to reduce spam. Learn how your comment data is processed.